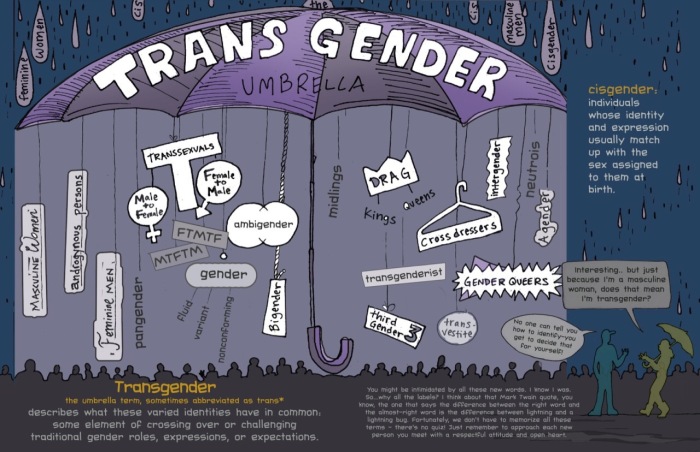 Almost overnight the topics of gender identity and transgender bathroom access became national headlines, and for the past year, the trans lobby has used memes, slanderous articles, and political force to shut down and label as bigots anyone who voiced a concern about one’s gender identity being used to access sex-segregated spaces instead of one’s biological sex.  It has also spent a great deal of time reiterating the dangers that transwomen face in restrooms with other biological males, while ignoring the dangers that women also face from males, and decrying that transwomen JUST WANT TO PEE!  But what exactly does transgender mean and who all does it include?
According to the National Center for Trans Equality (NCTE), “the nation’s leading social justice advocacy organization” for trans people, the term transgender refers to “people whose gender identity, expression or behavior is different from those typically associated with their assigned sex at birth. Transgender is a broad term and is good for non-transgender people to use”. Compare this to the American Psychological Association’s (APA) definition of transsexual: “The term transsexual refers to people whose gender identity is different from their assigned sex. Often, transsexual people alter or wish to alter their bodies through hormones, surgery, and other means to make their bodies as congruent as possible with their gender identities”. Does that mean transsexuals and transgendered people are the same?  Yes, and no. Transsexuality describes a very specific subset of transgender, which is an “umbrella term” that encompasses many identities, including transsexuals, cross-dressers, the genderqueer, non-binary individuals and those who identify with no gender.